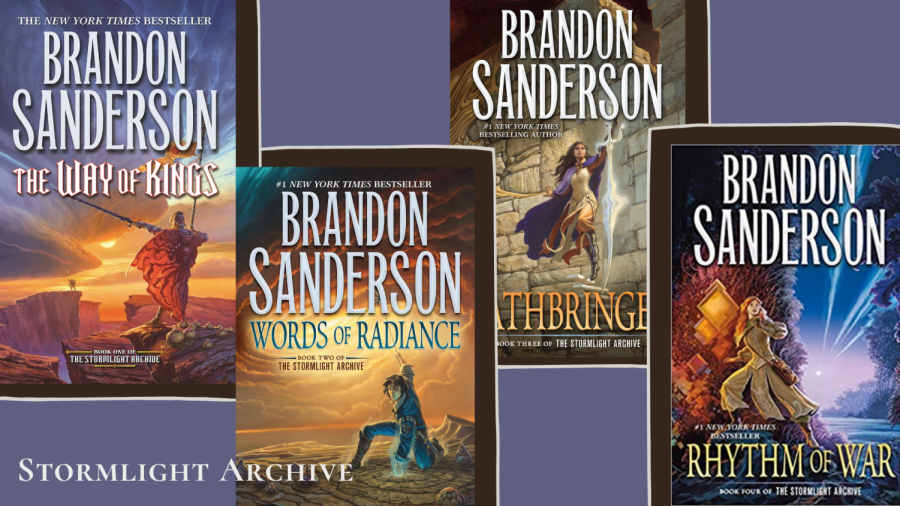 The Stormlight Archive series is an amazing read for anyone interested in epic fantasy.

“Life before death. Strength before weakness. Journey before destination.”

The Stormlight Archive is an epic fantasy series written by Brandon Sanderson, with four out of ten planned novels published so far. I read the first three, The Way of Kings, Words of Radiance and Oathbringer, and they swept me off my feet in a way that immediately shot the Stormlight Archive to the top of my favorite book series list.

The Stormlight Archive centers around three characters: Kaladin, Shallan, and Dalinar, who live in a world consistently devastated by highstorms, and who are going through a war against another species called the Parshendi. Kaladin is brought into the war as a slave and has to fight seemingly insurmountable odds in order to survive. Dalinar is an infamous warlord who’s on the frontlines of the fight, until he begins to receive visions from the Almighty telling him to unite the entire world to survive an impending and unknown doom. Shallan is far away from the war, planning a daring theft from her tutor, who happens to be Dalinar’s niece.

There are rumors of an ancient order known as the Knights Radiant returning, who fell centuries ago after betraying mankind in one of the many wars this world, Roshar, has gone through. Jasnah, Shallan’s tutor, is especially intent on discovering secrets about the Knights Radiant’s betrayal and discovering the true cause of the current war.

Before you start The Way of Kings, go outside and look at the sky. Done? Good: raise your expectations that high. Impressive and incredible are words that hardly describe this series. This series is filled with tales of life and death, love and hate, trust and betrayal, faith and atheism, and every single element of this story is fully developed and brought to life.

The character work in this series is some of the best I’ve ever had the pleasure of reading. Sanderson truly takes his time letting the audience get to know the characters and their motivations. Every single character feels like a real person with their own personalities and problems that are realistic to the narrative. The world building is especially remarkable, with intricate and detailed explanations of every single thing in the world, ranging from weather and history to the behavior of grass.

The Stormlight Archive is extremely long, with each book in the series so far being at least a thousand pages. The Way of Kings is especially slow, with much of the focus of the novel being on the characters with little plot, but the world, characters, and magic system are enchanting enough to leave you wanting even more. When I finished The Way of Kings, I almost instantly picked up Words of Radiance because I was that desperate for more content.

If you’re a fan of epic fantasy, you cannot go wrong with picking up this series. Sanderson has created a marvelous world with characters and magic that will live inside you far long after you’ve finished reading.