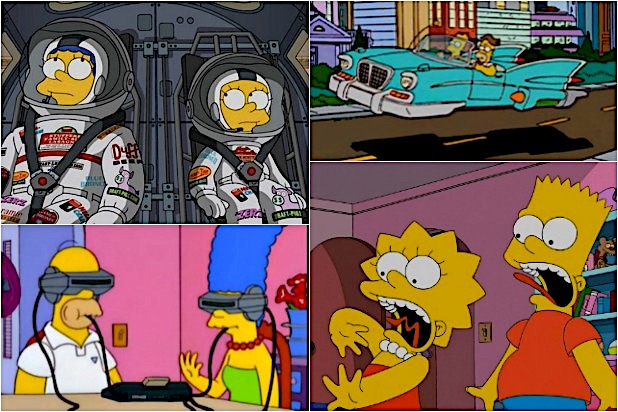 The Simpsons writers seem to predict the future.

The hit TV show The Simpsons from FOX has been running episodes for over 30 years, during which they revealed some disturbing events that came true in the past few years. From politics to diseases to famous figures, The Simpsons are now notorious for predicting significant events, but some are just viral hoaxes building on the legend of The Simpsons as the predictors of all.
Donald Trump’s Presidency – Season 11, Episode 17, 2000
Fifteen years ago, in the episode “Bart to the Future,” a joke floated around that Trump would become president. However, the business mogul teased about running a presidential campaign as early as 1999, so the Simpsons’ prediction was not as foreshadowing as it seems. The images on the left side of the set below are from a short video called “Trumpastic Voyage” which was posted to YouTube in July 2015, after Trump had officially announced his presidential run. Coronavirus outbreak – Season 2, Episode 21, 1993
The images below depict a disease called the “Osaka Flu” from the episode “Marge in Chains” in which Japanese packagers accidentally ship the disease to Springfield (the city the show takes place in). While it predicted the international spread of a respiratory illness, the cloud of infection did not hail from Wuhan, China, where the 2020 coronavirus began. Additionally, the image of the newscaster below is from a different episode and was found to be changed. “Coronavirus” had been added in; the original sign says “Apocalypse Meow.”

Blinky the three-eyed fish – Season 2, Episode 4, 1990
Bart discovers a three-eyed fish in a river outside the Springfield power plant he names Blinky. In Córdoba, Argentina, a three-eyed wolf fish was caught in a reservoir where water from a nuclear facility was dumped.
Horse meat – Season 5, Episode 19, 1994
The lunch lady from Springfield Elementary School is shown putting “assorted horse parts” in a pot for the students’ lunch. In January 2013, the Food Safety Authority of Ireland announced that they found large amounts of horse meat in beef burgers from grocery stores around the UK.
Apple watches – Season 6, Episode 19, 1995
The Simpsons created the idea of a smartwatch used like a cell phone in 1995 before Apple watches were released in 2015.
The Ebola virus outbreak – Season 9, Episode 3, 1997
The 2014 Ebola virus was predicted in this episode in a book that Bart read when he was sick. It was titled, Curious George and the Ebola Virus. While the Ebola virus was discovered in the late 1970s, the most recent outbreak of 2016 in West Africa reported almost 30 thousand cases.
A tomacco hybrid plant – Season 11, Episode 5, 1999
An American Simpsons fan named Rob Baur from an Oregon sewage treatment facility was inspired by Homer’s tomacco plant—a hybrid of tomato and tobacco—and created his own from a tobacco root and tomato plant. Writers of The Simpsons heard about his plant and invited Baur over to try the tomacco fruit. While this was more of an inspiration than a prediction, it still felt necessary to include.
Toy poodle scams – Season 13, Episode 22, 2002
Fat Tony, the underboss of the Springfield Mafia in The Simpsons, makes lots of money off scams and schemes including gluing cotton balls onto ferrets and selling them as toy poodle dogs. In Argentina, a man thought that he was buying a toy poodle dog when in fact it was a groomed ferret.
Defective voting machines – Season 20, Episode 4, 2008
During the year of former President Barack Obama’s first election campaign, Homer is shown choosing the Democratic vote but the machine malfunctions and changes his vote to Republican John McCain. Four years later in the 2012 election, a voting machine in Pennsylvania was taken out for changing Obama’s votes to count for Senator Mitt Romney.
Beating Sweden in the Olympics – Season 21, Episode 12, 2010
The second curling medal for the United States Men’s curling team was won in the 2018 Winter Olympics against the usual winner Sweden. In 2010, the events were played out the same in The Simpsons after Marge and Homer Simpson win gold at the Vancouver Olympics. Weird, right?
A Nobel Prize winner – Season 22, Episode 1, 2010
Bengt R. Holmstrom, a professor at MIT, won the Noble Prize in economics in 2016—six years after Simpsons character Milhouse predicted he would in the show.

While time travel hasn’t been proven and most fortune tellers are hoaxes, the Simpsons prove to be right time after time… someone should probably look into that.