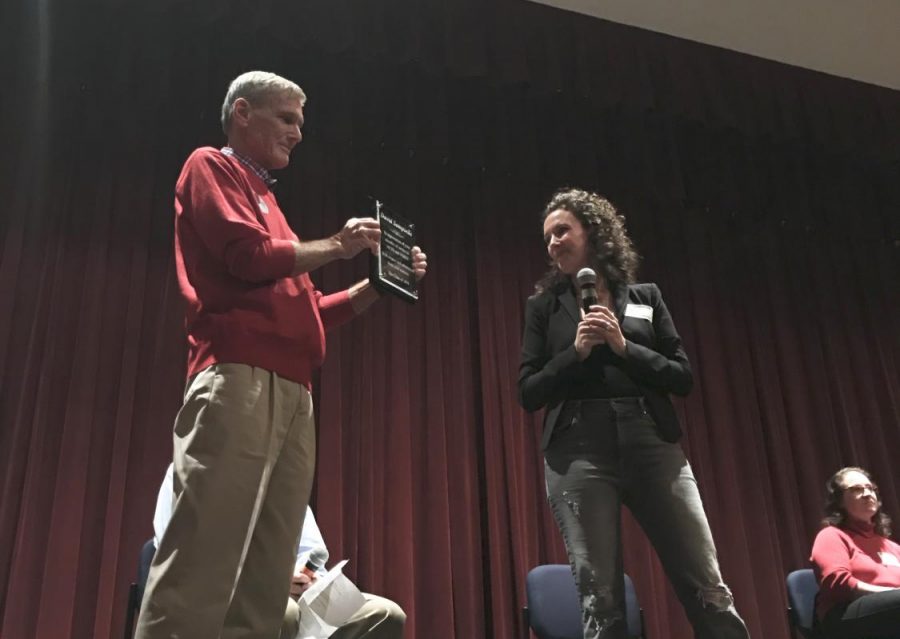 Class of 1994 alumni visited on Friday, November 1 to host an assembly for the school’s thirtieth anniversary in the auditorium. The class of 1994 was the first graduating class that attended all four years at Watkins Mill High School.

Alumni decided to celebrate by honoring David Sampselle, a recently retired teacher who left his mark on the school. “It’s important to have a teacher that has a good influence on you,” class of 1994 alumni Jon Solomon said. “Mr. Sampselle was definitely that person for us.”

Sampselle was presented with a plaque commemorating his time at Watkins Mill and the positive influence he had on his students in preparing them for life after high school. “You made us more creative thinkers and made us more effective communicators,” class of 1994 alumni Jennifer Marchetti said.

Sampselle was delighted with the recognition and gave everyone a speech to say thank you. “[The class of 1994] had dozens and dozens of great students,” Sampselle said. “And I’m sure it’s the same this year, but this [class] was one of the best.”

“I appreciate this …  but [the alumni] deserve all the credit for what happened during class,” Sampselle added.

The alumni then spoke, giving advice to current seniors about how to prepare for life after high school. One main theme was that it is okay to change as a person and, at some point, everyone has to. “I thought maybe I need to reevaluate myself and figure out what I’m really good at and what I really want to do,” class of 1994 alumni Debbie Dasgupta said.

Alumni also talked about the skills students need to become young adults and be ready for a real job. “Communication skills, professionalism, work ethic, and accountability are all very important skills to have when working after high school,” Marchetti added.

“You have to make sure you build your skill sets in these areas, which is why we are also so grateful for Mr. Sampselle for teaching us communication skills,” class of 1994 alumni Alexandra Levitt said.