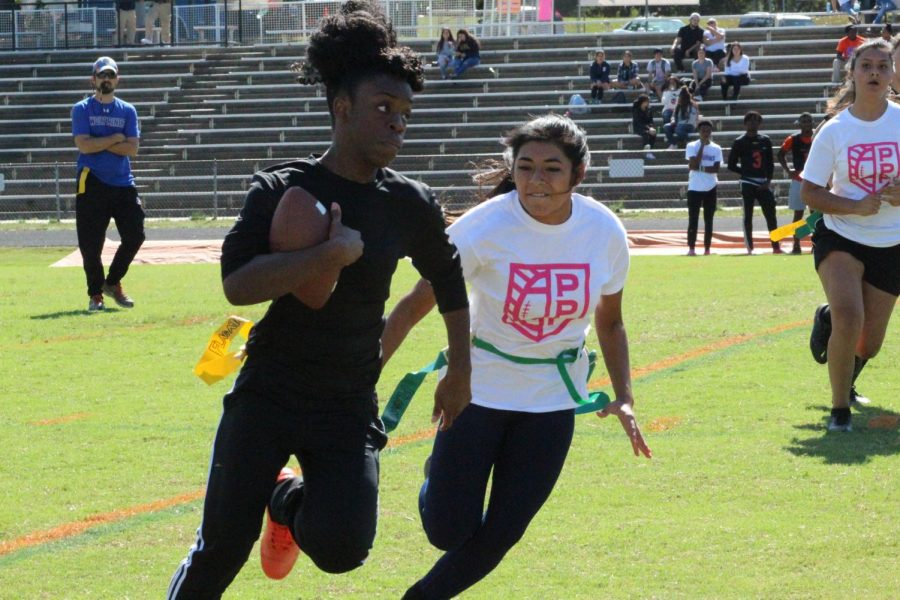 Senior Amelia Burton runs the ball down the field.

In the varsity game, the Rams opened the game up scoring a touchdown in the first quarter, making the score 0-7.

“It’s a tough loss,” senior Christian Lyles said. “We should have won that game. There were a lot of mental errors.”

In the second quarter, the Rams reclaimed the lead with touchdown bringing the second-quarter score to 13-7

Sophomore Peter Kikwata caught a seven-yard pass for a touchdown in the third quarter. But Rockville quickly matched, scoring a touchdown and getting the two-point conversion Bringing score 21-20

In the fourth and final quarter,  Brown had his second touchdown of the night. The extra point was missed, making the final score was 21-20.

“We are going to prepare for [Damascus on October 11] the way we prepare for anybody, by working hard,” senior Demetrius Rush said.

After school Friday, junior and freshman faced off against the seniors and sophomores in the 2019 powderpuff game. The junior team walked away with a win, leaving with a score of 28-16.

The juniors and freshman opened the game with a massive opening play, bringing the score to 7-0.  “I think the biggest part of the game is when I scored the first touchdown,” freshman Esther Kouadio said.