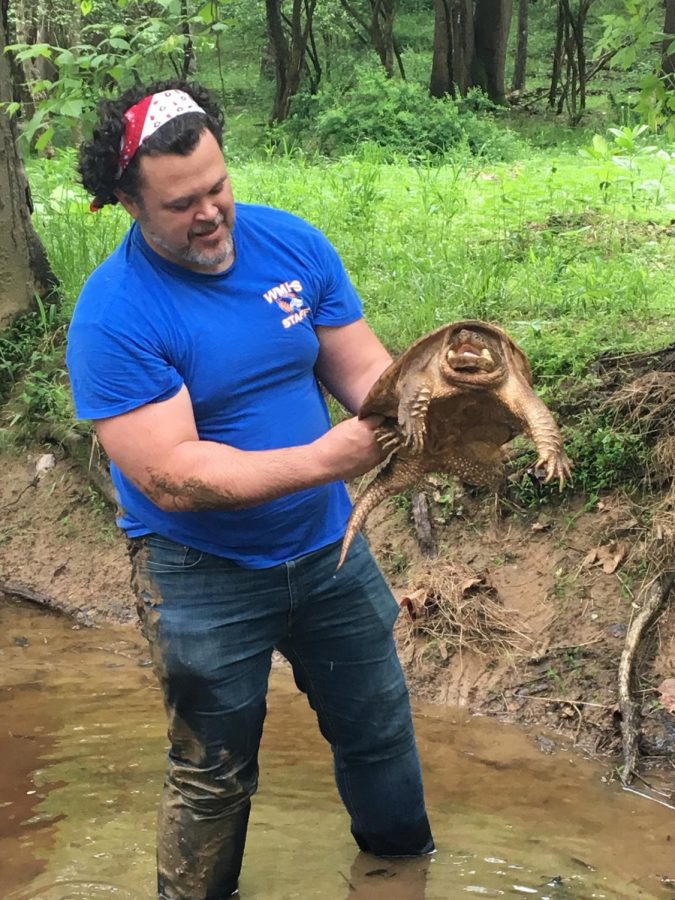 Science teacher Charles Miller demonstrates the correct way to hold a turtle during his annual turtle study in the creek behind the school.

Snapping jaws, long tails, and two protruding eyes. Alligators aren’t the only ones that fit this description. There are numerous snapping and box turtles right behind the school.

With a keen interest in turtles, science teacher Charles Miller sets his mind on exploring the stream behind the football field and tagging students along with him. “Mr. Miller is the turtle guy,” science teacher Karen Doerrler said.

While collecting data for a turtle population project, students and sponsors found many box turtles while exploring out in the woods. They were lucky to spot a few, especially since these creatures like to burrow in mud.

In total, 14 turtles were found. Sizes varied from a small pebble to a large dinner plate. It’s important to keep track of them for future analysis, Miller said. “I thought it would be interesting to do a population study to see how many are approximately living in the woods, ” Miller added.

Once the turtles were collected, the process of taking their measurements and marking their shells to see whether or not they would be the same when students went back to check began. The method used was “mark and recapture,” where organisms were purposely marked and released to view the total population size.

The turtles are exciting to find, but they have a bigger role than that. “They’re an important part of the ecosystem…they help disperse seed and plants and keep the underbrush down in the forest,” Doerrler said.

Students had the chance to connect with nature as they searched for turtles behind the school. While there, they also came across various other animals that lived nearby. Not only will they be more informed about turtles, but they will also learn interesting facts about other animals. “I would recommend others to join in,” sophomore Jazlyn Cespedes said.

Wearing the right shoes and long pants, as well as spraying tons of mosquito repellent is the key to joining in on the last turtle adventure occurring on May 18 at 11:00 am. Students can help analyze whether the mark and recapture method is successful and even find out where the turtles were originally discovered.