Game of Thrones Season 8, Episode 5 Recap–the end is near! 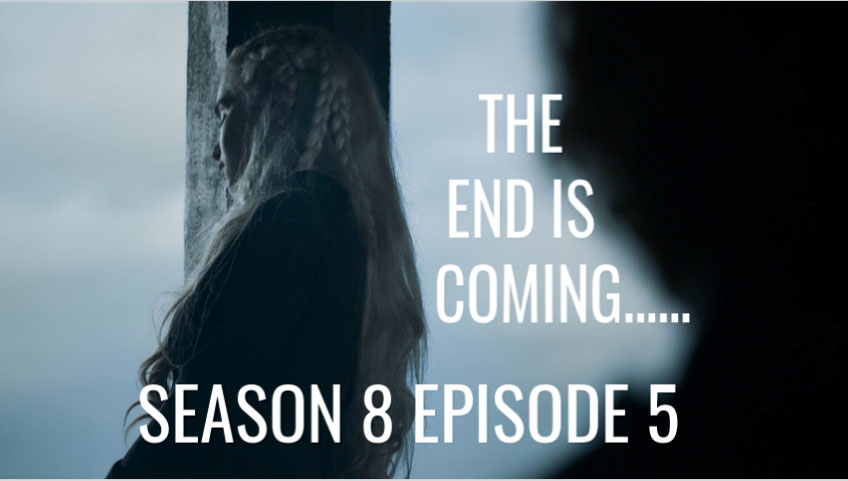 The end is near for Game of Thrones fans, but what on earth just happened to all of that character development?

Game of Thrones has had a wild season so far. Everything we thought we knew about the characters is now thrown out the window. Truly tragic.

Last night’s episode was, I would say… blasphemous. My good sis Daenerys literally lost her mind and burned down all of Kings Landing. However, let’s chat about the events that led up to such. The episode starts with Daenerys killing Lord Varys using dragon fire because he found out about Jon‘s true identity.  Minutes later we learned that Jaime has been captured after attempting to fully back to Kings Landing. He got lucky because Tyrion found him an escape route so he could go see Cersei.

Jamie then escaped. So basically that whole scene with Brienne was a lie.  Why are you doing this to us, Game of Thrones?

On the other hand, Daenerys, the remaining Unsullied, and the remaining Dothraki took on Kings Landing. Daenerys and her last remaining dragon burned the Euron’s entire fleet and took down the wall to Kings Landing. It was honestly amazing.  Both sides fought until Kings Landing rang the bell, which symbolizes surrender. However, my crazy sis, once my good sis, showed no remorse and burned the entire city to the ground.  She even almost killed Arya unknowingly.

The Hound and Arya then went to the Red Keep to kill Cersei, but Arya turned around when she realized the danger she was in (Thanks, Sandor!). However the Hound kept going on until he found his brother. They both battled until finally the Hound realized that he couldn’t kill Ser Gregor because dude was already dead, so he threw himself and his brother into the pits of fire and killed them both. It was honestly one of the only deaths that I can say I was happy with.

Towards the end of the episode, Jamie and Cersei find themselves below the castle trying to escape. However, the debris has blocked the exit and they slowly accept their death. As the rocks slowly began crumbling down from the ceiling, Jaime and Cersei begin to embrace each other accepting their faith. The scene and cuts out as the rocks fall.

So not only is Daenerys suddenly loony tunes, Cersei didn’t even get a real death?  Some rocks fell on her head while she stared lovingly into her brother/lover’s eyes?  THAT’s all we get after eight long years? Really?

The final scene then shows Arya looking at all the debris that Daenerys and her dragon have made. She sees the one random other survivor of the carnage, a white horse, and rises to get out of Kings Landing. The episodes then ends.

Honestly, the whole episode was a mess to me, but I’m still very excited for the series finale. Well readers, see you next week, sissies!