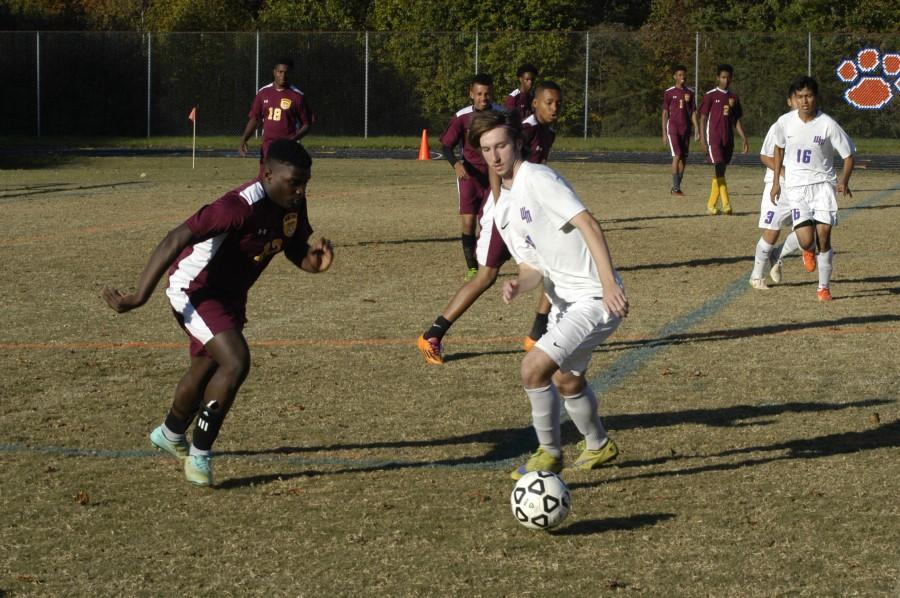 Watkins Mill High school faces off against The Seed School on October 20.

Boys soccer looks to continue their late-season dominance going into the playoffs against Magruder High School today at Walter Johnson High School. The team has outscored their five previous opponents 25-2 and are currently on a five-game winning streak.

The boys played a home game October 26 against Gaithersburg High School. The game started with an honoring of the seniors who played their last game ever on their Watkins Mill Stadium field. Sophomore Yann Kouemi and junior Daniel Juresic both sat the game out, but the boys still won 2-0.

Although the game started slow, senior Shawn Simpson scored a late first half goal to put them up 1-0. The game had a strong showing with much of the student body attending. In the second half, junior Jojo Cann added another score. The boys shut out the Trojans for the remainder of the game and held on to win their final regular season game.

The soccer team played a fabulous game against an unfamiliar team from Baltimore on October 20. The Seed School proved no challenge as the Wolverines cruised to an easy 8-0 victory. The first half consisted of three goals, while the second half added five more.

Senior captain Roger Larios-Ramos said, “I think [the win] was a whole team effort.” Six different people scored, starting with sophomore Yann Kouemi launching an early first half goal. Sophomore Walter Gomez and junior Daniel Juresic rounded out the first half with goals of their own.

“Kids who didn’t [usually] get to play got in and scored,” Juresic said. “We got to put our [second team] in.” The second half started off with Gomez’s second goal followed by a goal by junior Andy Alvarado. The game ended with two consecutive goals from senior Giovanni Palermo and a goal by junior Aroonav Pradhan.

Although the team won the game they still could improve on many things.

Pradhan said, “The team could improve on [transitioning] back to defense.” It just shows the team’s discipline when they can find the wrong in a game they won 8-0.

“Since the team wasn’t that challenging we took a lot of shots and got a lot of goals,” Juresic said.